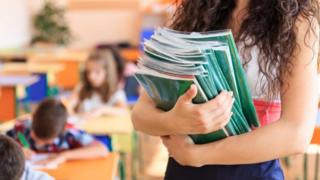 Teachers on the Isle of Man are to be balloted on whether to take strike action as their pay row continues.

Members of the National Association of Schoolmasters Union of Women Teachers (NASUWT) will be asked to vote between 21 July and 4 August.

Teachers could strike between August 2020 and February 2021 if they vote for the industrial action.

Education Minister Alex Allinson said he was “disappointed” by the union’s decision to seek a strike mandate.

The union has 478 members in the island’s schools, including 59 at University College Isle of Man.

In a similar ballot held in December, 94% of the union’s members backed a walk-out, while 98% supported taking action short of a strike.

Damien McNulty, a member of the NASUWT’s national executive, said that because the union’s membership had increased since December, he was confident the new ballot would “revalidate our democratic mandate”.

Teachers will again be asked to support both a walk-out and action short of going on strike, which would mean refusing to do administrative tasks such as attending meetings and replying to work emails.

The row started in 2018 after the School Teachers’ Review Body’s recommendation of an across-the-board 3.5% pay rise was not implemented in full.

Teachers’ pay in the island is based on what their peers in the UK earn.

Talks between the government and teaching unions were put on hold in March amid the coronavirus outbreak.

Thanking teachers for their “ingenuity and flexibility” during the lockdown period, Dr Allison said he was “disappointed that the NASUWT have decided to propose strike action”.

“I hope better communication and dialogue can help find a fair settlement for our teachers and lecturers,” he added.

Mr McNulty said the union was keen to “get back round the table”.

“Strike is not our starting point, it’s our end point if the dispute can’t be resolved,” he added.

Explainer: Pandemic behaviour – Why some people don't play by the rules

Irish tourism boss quits after taking a vacation in Italy