Decision comes after a cruise line suspended operations following discovery of 41 infections on board one of its ships. 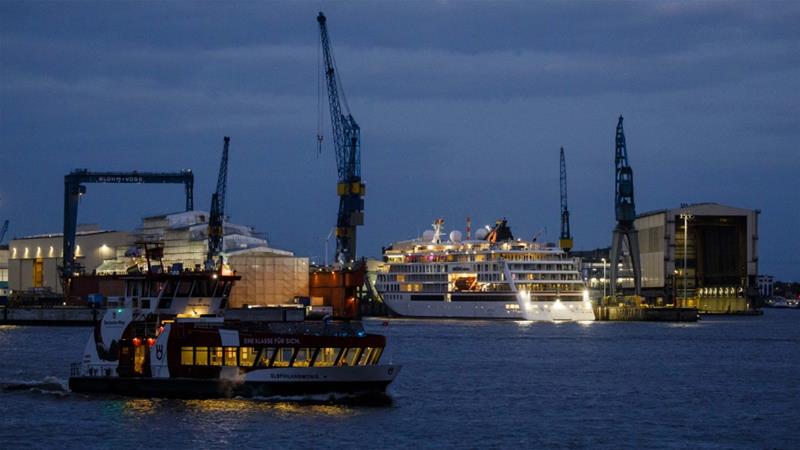 Norway will stop all cruise ships with more than 100 people on board from disembarking at Norwegian ports following an outbreak of COVID-19 on a Hurtigruten cruise ship, the Norwegian health minister has said.

The announcement on Monday by Bent Hoie came hours after the cruise line said it would be halting all trips and apologised for procedural errors on one of its ships after a coronavirus outbreak led to five passengers and 36 crew members becoming infected.

The confirmed virus cases from the MS Roald Amundsen raised new questions about safety on all cruise ships during a pandemic even as the devastated cruise ship industry is pressing to resume sailings after chaotically shutting down in March.

Hurtigruten was one of the first companies to resume sailing during the pandemic, starting cruises to Norway out of northern Germany in June with a single ship, then adding cruises in July to the Arctic archipelago of Svalbard.

The new rules will initially apply for 14 days, Hoie said, and will not apply to regular ferry traffic, both domestic and international.

The Nordic country has ferry connections to Germany and Denmark, among others.

The 41 people on the MS Roald Amundsen who tested positive have been admitted to the University Hospital of North Norway in Tromsoe, north of the Arctic Circle, where the ship is docked.

In addition to MS Roald Amundsen, the cruise line said it suspended two other ships – the MS Fridtjof Nansen and MS Spitsbergen – from operating for an indefinite period.

“A preliminary evaluation shows that there has been a failure in several of our internal procedures,” Hurtigruten CEO Daniel Skjeldam said in a statement.

He added the company that sails along Norway’s picturesque coast between Bergen in the south and Kirkenes in the north is “now in the process of a full review of all procedures”.

It has contacted passengers who had been on the MS Roald Amundsen for its July 17-24 and July 25-31 trips from Bergen to Svalbard, which is known for its polar bears. The ship had 209 guests on the first voyage and 178 guests on the second. All other crew members tested negative.

Norwegian police said they would investigate whether any laws had been broken.

Four of the MS Roald Amundsen’s crew members were hospitalised on Friday when the ship arrived at the port of Tromsoe, and later diagnosed with COVID-19. Tests showed another 32 of the 158 staff were also infected.

Among the infected crew, 32 were from the Philippines while the rest were of Norwegian, French and German nationality. The foreign crew had been tested for the coronavirus before leaving their home countries but did not quarantine before starting work on the ship, the company said.

Passengers were allowed to disembark before anyone had been diagnosed, triggering a complex operation to locate them.

So far, five of the combined 387 passengers travelling on the ship on two separate cruises since July 17 have been found to carry the virus, the Norwegian Institute of Public Health (FHI) and the Tromsoe municipality said.

Hurtigruten touted reduced passenger capacity, social distancing and strict rules on hygiene as it returned an ocean-going cruise ship to service in mid-June.

The MS Roald Amundsen had been scheduled to sail around the British Isles in September.